Look in the fridge and make something out of what you got.  I made this dinner the other night.  Pretty easy and delicious.  A basic tomato based soup and hummus spread on a toasted naan bread was pretty much it.

Carrot Soup - I added 1 jar of tomatoes, 1 bag of frozen carrot pieces, a square inch of fresh ginger (processed through a garlic press), celery chunks (cooked a bit in a pan first) and some left over spinach.  I blended everything but the spinach and then simmered around 20 minutes.

Naan Hummus Pizza - it's one of my theories in life that hummus can make a meal.  For this open faced hummus pizza -  I took naan bread & brushed it with oil & then broiled it around 5 minutes.  I had one extra veggie burger - so I sliced it thin & fried it up with some Portobello. From there I spread on some hummus and then added the veggie burger, mushroom, & some tomato. 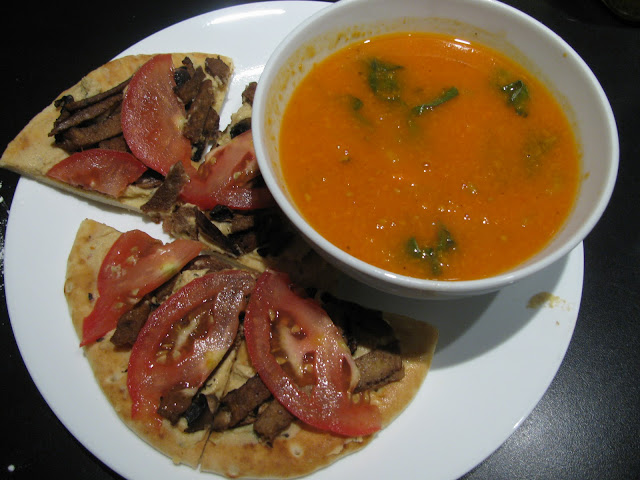 Later I added a can of coconut milk to the carrot soup.  This was fantastic.  Although my husband didn't seem to agree - I thought it was creamy perfection with the ginger & carrot.
Posted by Nik at 7:47 PM